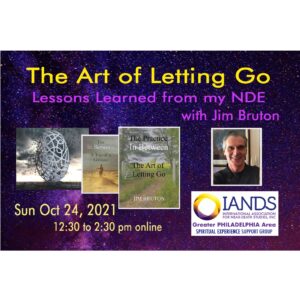 The Art of Letting Go: Lessons Learned from my NDE
with Jim Bruton

Join us as this amazing man shares the wisdom he received and the lessons he has learned as a result of his NDE 5 years ago. These lessons are covered in detail in Jim’s second book, “The Practice In Between: The Art of Letting Go,” just published this past June. Jim will share some of those lessons with us.

Here are some of Jim’s words about The Art of Letting Go:

In my first book, “The In-Between, A Trip of a Lifetime”, I shared my life before my Near-Death Experience, the plane crash leading up to it, and the changes in my perspective that followed.

As people learned of my experience on the other side and how it changed me, they asked how they could use what I learned to make changes in their own life. As I considered this, it became clear to me that many people are trying too hard and many times trying to fit into models that simply do not fit. Many begin with religion, which struggles to remain relevant to our changing world and its values. From there, some become atheists, some agnostic, and those who continue to search do so outside the boundaries of faith that no longer feed their souls.

Much of the world believes that they are restless and unfulfilled because they need something else, something more, that will satisfy that hunger. Many are the lectures and workshops that seek to give them that one more thing that will make the difference.

My approach is based on the assumption that we already have everything we need to become happy, spiritual beings. That is why I have written on the virtues of simply letting go of the mindset of needing the magical one more thing and just starting from scratch.

Since God made us, we already have a relationship with the divine. It is in the letting go of the dross that encrusts us that we clean ourselves up, become still and present, and see things as they are.

In this meeting, I hope to bring you closer to this state of being.

As a pilot, photographer, videographer, and foreign war correspondent reporting from war zones like Iraq, Jim Bruton lived an adventurous life most people only dream of. Five years ago, Jim had a terrible plane crash and was so injured that the doctors put him in an induced coma for an extended period. This is where Jim experienced the place his guide called “The In-Between” where Jim was able to adjust his future life probabilities.

Jim has appeared and been interviewed on the series “Life to Afterlife” on Amazon’s Prime Video, has been interviewed on “Beyond Belief with George Noory” on Gaia TV, and the “Coast to Coast AM” radio program, and has done countless podcasts and YouTube interviews.

We hope you can join us!

This is a production of the Philly IANDS local group and ISGO (IANDS Sharing Groups Online).

For these groups, IANDS uses the very simple “Zoom” video conferencing program. After registering for the event, it’s as simple as clicking the link provided in your email (prior to the event).

These “special event sharing groups” are free to everyone!

That said, ISGO “Sharing Groups (Experiencer Sharing Lounge)” rely on charitable contributions to maintain staffing and administrative support. To continue to bring you a wonderful group experience, we thank you in advance for your kind donations: Simply click on the following link to donate: