A Vision Foretold of Her Near-Death Experience

Andrea Courey tells of her life-changing NDE and its after-effects, including after-death communication, spontaneous mediumship, automatic writing and helping others through Sound Healing.

A Vision Foretold of Her Near-Death Experience
with Andrea Courey 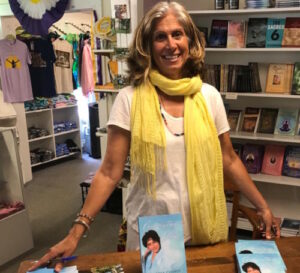 Andrea Courey will tell the story of a life-altering event which was foretold in a vision she had only fifteen hours before. She and her husband were both struck by a car as they walked along a snow-covered sidewalk and her NDE led to psychic abilities that have led her on a previously unimagined thirty-year journey.

Andrea’s life has seen extensive after-death communication with her grandmother, her deceased daughter Chloe and others who have asked her to deliver messages to bereaved loved ones, and these conversations across the veil have led to books and other callings, the most recent of which is the use of Sound Healing Meditation, through which Andrea helps others, such as parents who have lost a child.

Speaker’s Bio:
Thirty years ago, Andrea Courey was a wife and mother of three young children in Montreal, Quebec when she was struck by a car and had an NDE which changed the course of her life. No longer afraid of death, she suddenly realized that her marriage was no longer viable and began to hear from her grandmother across the veil. Now a single mother with no income, at her grandmother’s urging she became an entrepreneur, creating and running a company for eighteen years (Grandma Emily’s Granola). 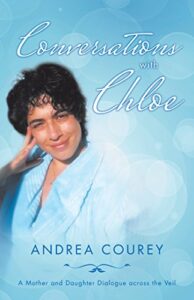 After selling the company in 2015, she was called to care for her daughter Chloe, who died with cancer the next year. Andrea’s 2016 book, “Conversations with Chloe – A Mother and Daughter Dialogue Across the Veil” (Click here for Amazon Link), was a collaboration with Chloe written over the months following her death. The three decades since Andrea’s NDE have been a journey of self-discovery, marked by psychic aftereffects including spontaneous mediumship, automatic writing, and after-death communication. She has only been sharing her story publicly since Chloe’s death and most recently has begun leading Sound Healing Meditations to help others, such as parents who, like her, have lost a child. 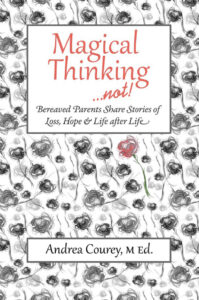 Her second book, “Magical Thinking …not!”, is the result of her work with bereaved parents and is available for free from Andrea’s website: https://andreacourey.com.