**** Audio Only Version **** (The speaker’s video image froze … but a very powerful message and intriguing Q&A session followed… you won’t regret listening to this one!) Karen shared an experience with clearly verifiable evidence from her out-of-body perceptions.

An NDEr with Veridical Evidence – Karen Thomas
**** An audio-only version **** 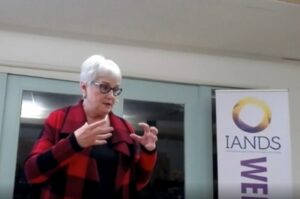 Karen Thomas shares her Near-Death Experience from 37 years ago when her surgery went awry. As people prayed for her, Karen experienced the prayers like “musical notes”, especially the prayer of her 9-year-old daughter. Karen will share details of her visit to the “Other Side” and her life review. Also, she later received corresponding verifications of her out-of-body observations.

Karen has been interviewed on NDE Radio, Alive and Live with Lisa D and We Don’t Die Radio with Sandra Champlain. Karen was also part of the documentary, Back From the Light, which was co-produced by Robert Neal Marshall and Raleigh IANDS facilitator, Yvonne Sneeden.

**** Audio Only Version **** (The speaker’s video image froze … but a very powerful message and intriguing Q&A session followed… you won’t regret listening to this one!)