From success to injury, depression to awakening. Daniel will take us on his journey of experience to the remembrance of our divinity. Listen to this narrative of awakening and transformation to emphasize awareness of cosmic consciousness and the growth path described can be yours as well. 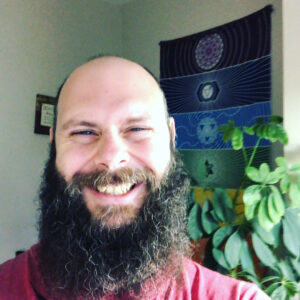 Danny is formally trained as a Health and Wellness Specialist in Moncton, New Brunswick where he has worked as Lead Trainer at the local YMCA for six years before branching off onto his own until approximately 2013. He has always had an interest in all things health. He spent much of his youth outdoors playing, climbing trees, laughing, living a really adventurous lifestyle. If it wasn’t fun, he wasn’t doing it.

In 2011, Danny suffered a life-changing injury which would cause him to fall into a deep depression. An identity crisis. At the time, Danny was the most demanded, highly respected and trusted trainer Province wide. He was wounded. Who was he if he couldn’t be the best trainer? The injury prevented him from performing the large majority of the movements he needed to perform his job. Danny couldn’t exercise the way he enjoyed either. It was outright crushing, but it led him to really think about the decisions he had made in his life. This experience was a catalyst for him to look deeper into the question, ‘Am I really fulfilled in my life?’

After six years of crushing depression, Danny had been graced with a Spiritual Awakening on September 18, 2016. In an instant, everything changed. Things started happening to him that he had only read about or saw in documentaries. This wasn’t the first time Danny had experienced something like this, but this was MUCH more powerful. Completely engulfing. It felt as though he was walking through what a person might call, heaven. Foods that once smelled good to him left him feeling nauseous, and colors were more vibrant and real than ever before. Everything seemed to glow. Danny could experience every person’s intentions and emotions in a mist or aura that surrounded them. This continued at this intensity for 2 weeks until it gradually subsided.

Danny had no idea what had happened and what was happening, but was left with a profound longing to understand. He has been on this journey nonstop since that moment and has had many life altering experiences and downloads. From the moment of his Awakening, the most important thing to Danny is to help humanity remember our divinity and connection to all things. To know that suffering carries a gift and that we all have a hidden power within us that is way beyond our wildest dreams.