In 2001, due to health issues, Ginny retired from a career in international security. After trying a variety of healing modalities and traveling to receive healing from “masters”, she experienced a profound NDE from cardiac arrest, where even though she was ready to leave this life, her horses and donkeys wouldn’t let her.

Following a near-death experience in which animals asked Ginny to return to fulfill an important task, she realized she possessed extraordinary gifts. This awareness sent her on an amazing spiritual 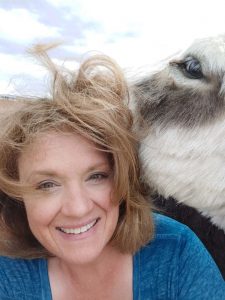 journey of discovery and self-healing during which she overcame the debilitating effects of emotional and physical abuse, PTSD and Lyme Disease.

Inspired and guided by these events, Ginny works with both humans and animals who have suffered trauma. In 2017 she began dedicating all of her free time working with traumatized animals following her dramatic personal experience attempting to rescue an injured horse named Clare displaced from the Lilac Fire in San Diego, CA in late 2017. Since then Ginny has worked with more than 300 traumatized animals.