Life… and the Afterlife! with Betty Eadie

In November of 1973, at the age of 31, Betty J. Eadie died following routine surgery. After undergoing what has been called “the most profound and detailed near-death experience ever recorded.” Betty J. Eadie’s international bestseller “Embraced By The Light”, has sold over 20M copies.

Life… and the Afterlife!
with Betty Eadie

In November of 1973, at the age of 31, Betty J. Eadie died following routine surgery. After undergoing what has been called “the most profound and detailed near-death experience ever recorded.” Betty J. Eadie, author of the international bestseller Embraced By The Light, had the most eminent, prominent and extensive near-death experience ever recorded. 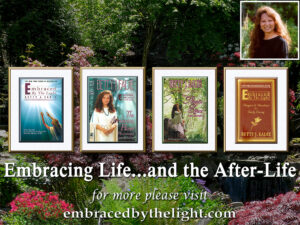 She has written several books in an effort to share with others what she was shown in the spirit world about God and man’s existence, the meaning of life and what awaits all in the after life. Betty has given countless speaking events, lectures, radio and television appearances and interviews across America and abroad informing others that death need not be feared, the exquisite beauty of the spirit world, meeting Jesus, reuniting with deceased loved ones and the most important message of God’s unconditional love: that all are here to learn to “love one another.”

Betty J. (Stewart) Eadie is the mother of eight children, to-date she is a grandmother of sixteen grandchildren and has six great-grandchildren. She celebrated forty-eight years of marriage to her late husband Joseph L. Eadie Sr. before his passing in 2011. Betty and six of her adult children reside in the state of Washington.

Betty was born in 1942 in Valentine, Nebraska and was raised on the Rosebud Indian Reservation and in Rapid City, South Dakota. The seventh of ten children, her mother was Native American “Lakota Sioux”, and her father was Scots-Irish. At the age of four, Betty’s parents separated and she was placed in an Indian Catholic boarding school along with six of her siblings. Betty spent her youth in Indian Boarding Schools finally leaving them to marry and began a life that she dreamed of. Her dreams dashed, Betty remarried, this time to Joe who became her “rock” of strength and balance in life.

In November of 1973, at the age of 31, Betty J. Eadie died following routine surgery. After undergoing what has been called “the most profound and detailed near-death experience ever recorded.” Her spirit separated from her body and she traveled home to check on her family who were unaware of her presence. She then traveled through a tunnel of blackness to a being of light whom she recognized as the Savior of our world, Jesus Christ. Betty was then sent to view various aspects of what she calls our “heavenly home.” She walked through a beautiful garden, was shown the creation of this world, experienced a “life-review” and then was told she must return to earth–and why. Betty was then returned to her physical body with a life-changing message for all who will listen.

Enlightened by her experience regarding the afterlife, Betty turned to the study of psychology and the human response to death. She began volunteering her time at a cancer research center comforting dying patients and their families. Through her volunteer efforts, Betty witnessed the perceptions of others and their experience as they approached death, and even some, like herself, actually experienced death and returned. Betty also began participating in a near-death study with a local university. Compelled to learn more about the “total connection” of spirit, mind and body, Betty entered one of the largest schools of hypnosis in the world. She graduated at the top of her class, and opened a clinic to continue her examination of the subconscious mind; the spirit within each soul; and their connection to life, death, illness and healing. Betty used her knowledge of the spiritual principles she was taught through her near-death experience to help others overcome adversity and find needed healing that can only come from within. 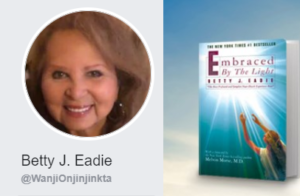 For 19 years, Betty shared the knowledge and message of her NDE with family, friends and small groups while continuing to practice all that she was taught during her experience. Eventually she began speaking publicly to larger groups, one of which was the International Association for Near-Death Studies (IANDS) as well as various grief groups and church gatherings. In 1987, Betty began writing her experience in pamphlet form to share with her cancer patients. Her efforts were brought to a halt when her father became ill and Betty became his sole caregiver. Then, in 1991, after the death of her father, she was prompted to pick up her writing again. However, this time she was “shown” how to finish the manuscript in book form. The result was the astonishing book, Embraced By The Light, whose phenomenal success quickly thrust Betty into the public spotlight. After “Embraced…” was published, Betty gave up her hypnotherapy practice and began traveling extensively throughout the United States, Canada, Great Britain and Ireland, speaking on death and what awaits all beyond this life.

The extraordinary success of Embraced By The Light stunned the publishing world. Never before had a book by an unknown first time author, published by an obscure publishing house, demanded so much attention and become a long standing New York Times national bestseller. “Embraced…” went on to sell over 20 million copies and stayed on the Times bestseller list in hardcover and paperback for more than two years, including a record 78 weeks in the prestigious #1 position. The worldwide attention and acclaim that followed its publication changed many lives, including Betty’s.